Confessions of a 35 Year Veteran 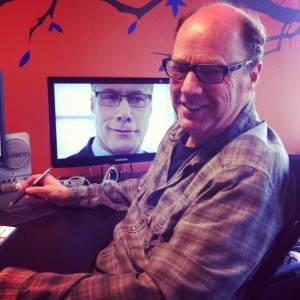 One of the youngest members of the old school editors, Tom Aberg is credited with co-inventing the Zoetrope while attending the École de Cinémathèque in Paris, France. He later moved to New York City where he wrote fortunes in a Chinese cookie factory. In a shockingly random event he gunned down a man who challenged him to a duel. The man, a troubled troubadour from Texas, had been challenging passers by on the streets of Chinatown, “Hey, I pack heat,” explains Aberg. “That fool never had a chance. It was good timing though, I’d pretty much run out of crap to write on those fortune cookies. I assumed his identity and moved to Dallas.” It was in Dallas, Texas he started Tom’s Easyway a postproduction company that he ran for 26 years.
Think of your favorite hero in the world, now imagine that person owns their own electric scooter, and that’s how to best describe Tom Aberg today. “There are many things folks still may not know about me,” Tom explains. “First, I’m a master of time and space, I AM A GENIUS!” he shouts, pounding his hand against his mahogany editing console. He also claims to have won the awesomest person award three times in a row, youngest man to ever win the Iditarod, and published several short stories and poems. Today, people call him a storyteller. “A storyteller that looks a lot like Brad Pitt,” Aberg adds.
“Nowadays, I use a good old fashioned Avid to help me weave my yarns,” Aberg explains. “Sure it’s pretty intense doing what I do. It takes a lot of skill and complete knowledge of general relativity theory to run one these babies, but its nothing I can’t handle.” After all the years in the picture business Aberg says he, “still cares a whole lot about different stuff… Maybe I care too much?” he ponders. He once gave a kidney to help save one client’s life. “Hey, it was a big account!” he adds.
At Fast Cuts, Aberg works diligently to embraces humility. “I can’t lie, it’s true I’m a legend and a lot of people want to get to know me, and it’s probably accurate to say most of them are women,” he says straddled on his electric scooter. “I’ve heard them say I’m the best at what I do, that I’m very, very intelligent, and… that I look a whole lot like Brad Pitt. Hey, I’m just a guy who’s still discovering his boundless human potential.”
As he pulls the hand throttle on the electric scooter to ride across the office, one gets the distinct impression they’re in the presence of someone… who thinks he looks a lot like Brad Pitt.